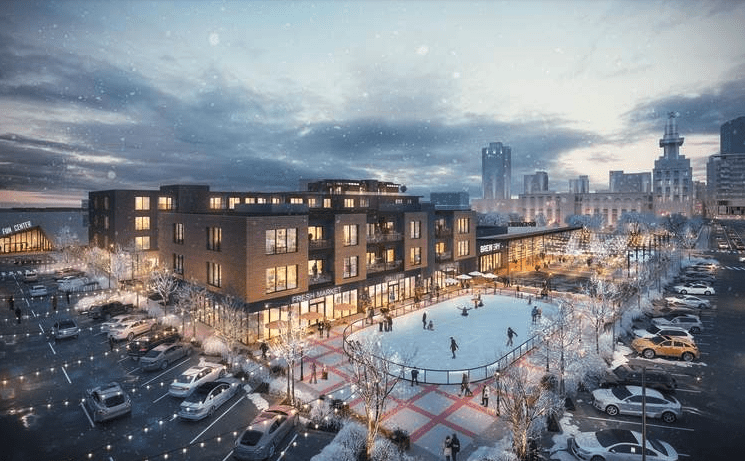 Two applications were submitted by the Friday afternoon deadline to repurpose 8 acres of vacant city-owned land once held for a casino at First Street and First Avenue W in downtown Cedar Rapids. The proposals hit upon a number of wish-list items suggested by residents and others at a community visioning process.

“It’s an important site and a large site,” Cedar Rapids City Manager Jeff Pomeranz said. “It speaks well for the community that we have two proposals and the proposals seem to include many of the elements our community has been talking about. There’s a lot to work with.”

A steering committee of local business people, architects, public officials, lenders and others is expected to review and score the applications over the next few weeks and make a recommendation. The Cedar Rapids City Council would choose one of the projects, likely in April, and direct city staff to negotiate financial incentives and other details.

State regulators rejected two attempts in four years to build a casino on the site, prompting the city to lead an effort to get the vacant land in the heart of the city along the Cedar River and bike trails back to use.

A team of local developers under an entity called 1st and 1st LLC submitted an $80 to $100 million entertainment-led development called Kingston Landing.

It is highlighted by a Big Grove Brewery, 12-to-14 screen movie theater, a public ice skating rink, 105 apartment and condo units, and a Spare Time family fun center with an arcade, bowling and video walls.

“Kingston Landing is a destination-style, master-planned development featuring new and unique amenities to the area that will undoubtedly attract hundreds of thousands of people to downtown Cedar Rapids each year,” according to the 79-page proposal.

Indianapolis-based Flaherty & Collins Properties, which submitted the lone viable application under a previous effort two years ago but was rebuffed, came back with a $63.2 million concept led by 360 residential and town home units, a saltwater pool, a public plaza and a beer garden.

“We envision the creation of a vibrant district that will provide an authentic urban streetscape and pedestrian experience,” according to the 100-page proposal. “Our focus will be the overall enhancement of the area through the introduction of retail, plaza, beer garden and residential uses, landscaped parkways, sensitively scaled buildings, and thoughtfully designed elevations.”

Concept: One block north of First Avenue W would include a Spare Time family activity center, 600-stall parking ramp, 12-14 screen movie theater and a multistory mixed-use building. A second block south of First Avenue and east of Second Street SW would include two three-story live-work buildings, a four-story mixed-use building including a boutique hotel, and a 112-space parking lot.

Big Grove takes up a third of the blueprint for the third block, along with a small public park with a public skating rink, and three- and four-story mixed-use buildings.

A dog park is proposed across First Street SW in public green space. The 105 living units and 170,000 square feet of commercial-retail space would be spread throughout the mixed-use buildings.

Financial gap: Not specified, but the proposal notes state tax credits for workforce housing and redevelopment, as well as local incentives would be sought. “We feel this open discussion process will be the best way to end up with a project that is viable for all parties involved.”

Team: A firm founded in 1993 and including more than 510 employees focuses on construction, development and management.

Concept: One block would have an L-shaped mixed-use building along First Street north of First Avenue W with four residential floors with 160 units, an 18-foot podium of residential units, 12,000 square feet of retail space and a parking structure with 448 stalls.

A second block envisioned as a second phase would have 200 housing units, many of them apartments, and surface parking. The third block would “reclaim and revitalize the existing land and tie the entire development together.” It would have an extensive, two-leveled public plaza with various public entertainment uses and landscaping.

Other public amenities include a fitness center, internet cafe, media lounge, club room with kitchen, bar and seating for groups, a game room, aqua lounge, heated saltwater pool and a bike shop, among others.

Financial gap: The proposal identifies an $18.2 million gap to be filled by public sources, of which they project $7.88 million would come from tax increment financing rebates.