CID and UPS Partner on Construction of New Cargo Facility 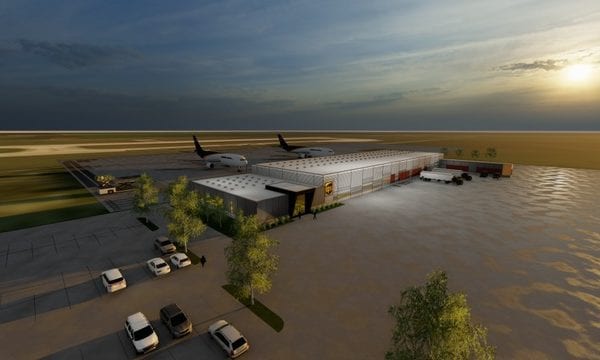 The Eastern Iowa Airport’s (CID) ongoing efforts to enhance its cargo operation has been boosted by a new agreement with UPS(NYSE: UPS), as the global logistics company will lease a new 40,000 square-foot facility at CID.

Officials from UPS, the airport, City of Cedar Rapids and others held a groundbreaking ceremony today (Sept. 25) to celebrate construction of the new $10.2 million facility. This is the first building to be constructed as part of the extensive airport expansion project.

The airport has worked with UPS to design the facility and will construct the building. In turn, UPS has signed a 10-year lease with CID with options to renew for an additional 20 years.

UPS has operated at the airport since 1983. Currently, UPS leases just under 7,000 square feet of space at the airport. The new facility is expected to be operational by spring 2021.

Marty Lenss, airport director, says the commitment shown by UPS will provide a significant economic development impact throughout the region.

“UPS has been a long-term partner with the airport and we appreciate the strong relationship,” he says. “As the demands of e-commerce and next day delivery service grow, so does the need for carriers to be able to efficiently meet those needs.”

“UPS is grateful to the Eastern Iowa Airport for their support of a new, larger facility. When completed, it will feature the latest technology and more capacity, connecting Cedar Rapids businesses and customers to the world even faster,” said Stephanie Dexter, president of UPS’s Northern Plains District. “It’s an exciting time to be part of the economic growth of the region, as we continue to expand UPS’s partnership with the community.”

The announcement of the new cargo facility comes just as work has finished on the new West Cargo apron.

In September 2018, CID received an $8.8 million Federal Aviation Administration discretionary grant to relocate and expand its cargo operation, positioning the airport to handle even more of the state’s cargo demands.

The grant – the largest discretionary grant CID has ever received in one year – was part of the federal government’s Supplemental Appropriations funds. The Federal grant, along with $1.5 million of Airport Commission funds, were used for the $10.3 million apron project.

Cost of the entire project, including the apron, cargo building and infrastructure is estimated at $27 million. In addition to the Federal grant, the State of Iowa Department of Transportation is funding $2.6 million through various grants and the Commission is funding the balance of $15.4 million.

Cargo has become a larger part of CID’s overall operation in the past few years. CID handles almost 50 percent of Iowa’s cargo, due, in part, to its superior geographic location, Lenss says.

“Our location provides carriers the ability to serve 11 million more people with a one-day Department of Transportation drive time than any place along the I35/I80 corridor,” he says.

In addition, moving the cargo operations from its current location adjacent to the passenger terminal frees up valuable apron space to accommodate future growth for commercial passenger service and the airlines’ increasing use of large aircraft.

The West Cargo apron is large – three football fields wide and 1.5 fields deep. The new apron will be joint-use, meaning existing and potential new air cargo carriers will be able to use the apron. In addition to UPS, CID is served by FedEx and DHL.