Washington County was originally formed in 1838 as Slaughter County in honor of William B. Slaughter, the secretary of Wisconsin Territory. The county, still named Slaughter County, became part of Iowa Territory on July 4, 1838 when it was organized. To honor George Washington, the county opted to change its name on 25 January 1839. The first settlers arrived in Washington County in 1835. The homesteads did not start until 1836. A town, Astoria, was built in the present township of Oregon; it became the first county seat and housed the first court house. The county seat was moved to the city of Washington in 1839.

The first religious society, organized by Reverend J.L. Kirkpatrick, a Methodist minister was created in 1839. The first newspaper was established in 1853; it was published for two years. In 1856 another newspaper started up; it has continued to the present. The major waterways through Washington County are the Skunk and English Rivers, and Crooked Creek. Timber is found in abundance around these waterways, which has allowed a timber industry to grow up. In 1855 Washington hosted the county’s first bank. The county population swelled after 1858, when a railway line belonging to the Mississippi and Missouri Railroad was laid there.

One of the more popular attractions in the county is the Amish settlement of Kalona.  The second largest community in the county which was first settled in the 1840’s. 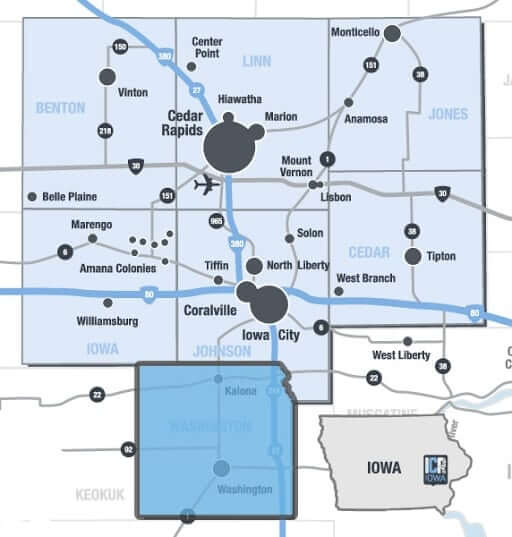