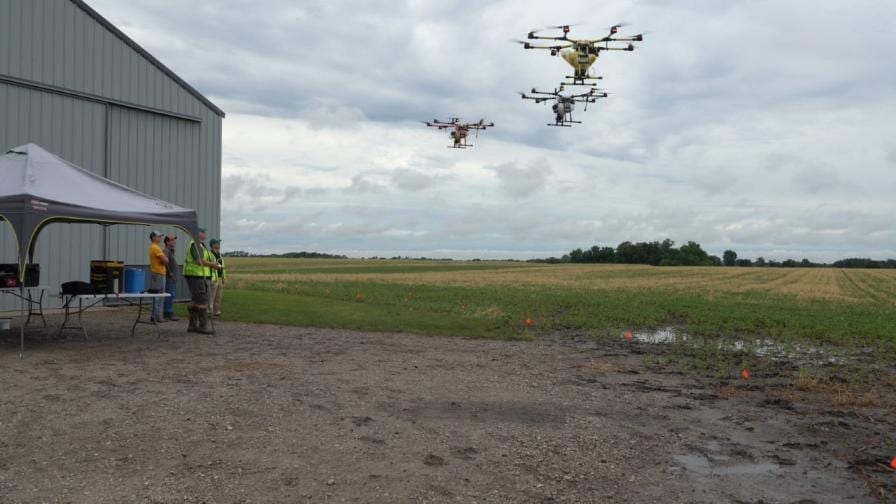 Rantizo, an AgTech firm in Iowa City, announced this week that they are approved by the Federal Aviation Administration (FAA) for operation of multiple drone swarms nationwide. This waiver allows for the safe operation of three autonomous drone sprayers by a single pilot and one visual observer.

“Our vision is to Fly & Apply on large areas with autonomous drone sprayers, so swarming is a critical component,” Rantizo CEO, Michael Ott explained. “Labor shortages in agriculture are a known and widely discussed topic. With our ability to now fly three drones at once, we are moving closer and closer to full autonomy of operation. That autonomy will help solve for the labor requirements needed to feed a rapidly growing world population.”

With this waiver, Rantizo is able to Fly & Apply in rural areas up to the field border and will not be limited to a specific geographic area. The company also says that their drone application productivity will increase to ~40 acres per hour, nearly tripling the current rate of 14 acres per hour. In tandem with a soon-to-be-released Mix & Fill auto-tendering station, Rantizo productivity is slotted to reach ~60 acres per hour before the end of the summer.

“Traditional thinking in farming is that bigger is better,” says Director of Sales David Pieper. “At Rantizo, we think more is better. I’ve been explaining our plan to accomplish greater productivity with multiple drones, and I’m thrilled that now farmers can actually leverage the platform.”

At a high level, drone swarming can be defined as a group of unmanned aerial vehicles, or UAVs, driven by artificial intelligence. Swarming drones work in concert with each other while in flight and can respond to changing conditions autonomously.

In the case of Rantizo, Ott says there are a few distinctions that make their swarming waiver unique and highly advantageous.

“Waivers are typically limited by geographical area. To our knowledge, we are the first drone company to receive a waiver for nationwide rural swarm spraying.” Ott said. “Now that Rantizo can fly drone swarms in all 48 contiguous United States it will truly empower our network of Application Service Contractors to provide cost effective and efficient drone spraying services nationwide.”

Rantizo received their initial approvals for single drone spraying operations from the FAA in July of 2019. At that time, the company became the first and only approved for drone spraying in the state of Iowa. Just less than a year later, FAA approvals for swarming can be added to the startup’s list of accomplishments.

Rantizo says it is planning to reveal their drone swarming publicly for the first time with a series of demonstrations coming up primarily across the Midwest. Interested attendees are encouraged to check out the events page on their website.