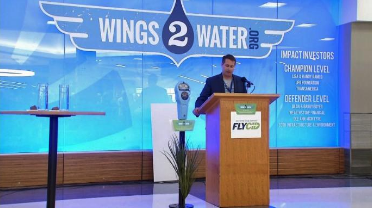 The Eastern Iowa Airport launched a fundraising effort Tuesday to fund water quality projects in both Linn and Johnson County.

The airport currently farms over 2,000 acres in an environmentally friendly way. That is one of the motivators that led to Wings 2 Water, a water quality initiative. Airport officials said they hope other airports across the county adopt similar plans.

“Really, it’s all about a grassroots effort to drive at this issue and begin to make a difference,” Marty Lenss, director of the Eastern Iowa Airport, said. “Let’s quit talking about it and get stuff done.”

The effort raises money through the airport to support environmental conservation projects in both Linn and Johnson County.

“Right now, we’re losing a lot of soils and the contaminants that go with those soils into our rivers, streams and other bodies of water and so one of our key components is to trap those sediments on our landscape, allow our plant communities to utilize those nutrients,” Brad Freidhof, member of the Johnson County Conservation Board, said.

“As soon as you click donate now, it takes you to either Johnson or Linn County, so the dollars, one hundred percent of that donation goes to those counties for the two projects that are listed under each county,” Lenss said.

The Eastern Iowa Airport is located in the Cedar and Iowa watershed which eventually leads into the Mississippi River watershed. Lenss said he hopes the other 185 airports within the Mississippi watershed join their effort.

“If we can roll this network, Wings 2 Water, out within that watershed through airports and our natural marketplace terminal, we can really make improvements towards ultimately the Mississippi and the dead zone goal,” Lenss said.

Freidhof said the effects of polluted water runoff are not just a local problem and have national consequences.

“This isn’t a ‘you,’ this isn’t a ‘me,’ this is an ‘us’ type of initiative,” Freidhof said. “All of us are impacted by water quality, drinking water, recreation areas and so it takes an effort by all of us to improve water quality so we can all enjoy it.”

Wings 2 Water has a $250,000 dollar goal to fund conservation projects in Linn and Johnson County this year. They announced on Tuesday that, through donations, they’ve raised over $130,000 dollars.