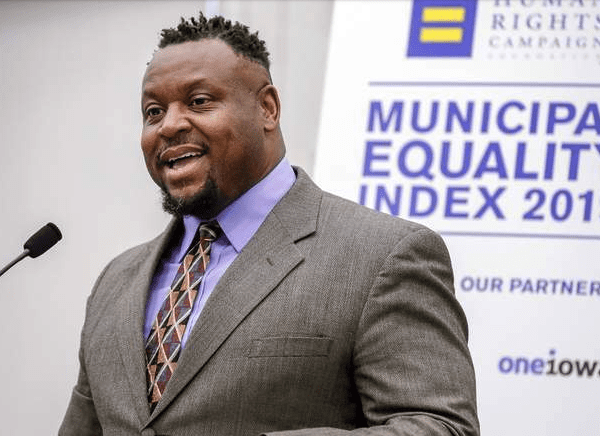 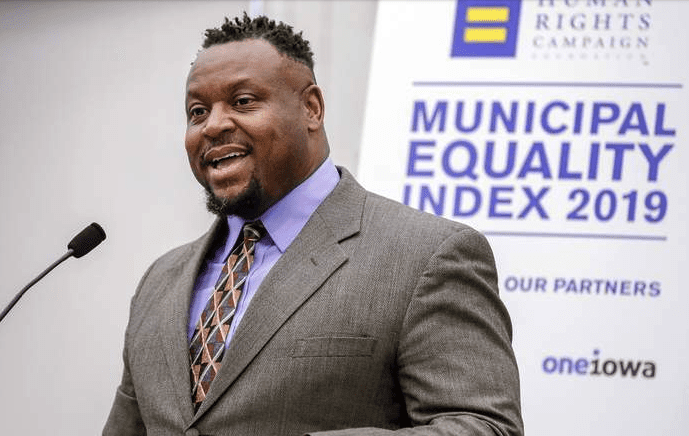 The following article was published by the Cedar Rapids Gazette on 11/20/2019.

When Bruce Teague arrived in Iowa City 26 years ago as a black, gay man from Chicago, he knew he could have faced discrimination. Instead, he found a community that loved, welcomed and accepted him.

“I have never felt more safe or more comfortable with who I am than here in Iowa City,” he said.

Because of that acceptance, Teague put down roots in Iowa City, started a family, founded two businesses and was elected to the Iowa City Council. Tuesday, he was among those who celebrated Iowa City’s history of being a leader in LGBTQ inclusion on the municipal level.

In its annual rankings of cities across the nation, released Tuesday, the Human Rights Campaign Foundation gave Iowa City — as well as Cedar Rapids and Dubuque — perfect scores on its Municipal Equality Index.

The index is in its eighth year and this is Iowa City’s seventh time being ranked. It has achieved a perfect score from the organization in six consecutive years.

“The fact that Cedar Rapids has scored a perfect 100 for four years in a row shows that we are on the right track as a welcoming community with respect for the rights of all citizens,” said Cedar Rapids City Manager Jeff Pomeranz. “While I am extremely proud of our perfect score, I also recognize that our work is not done. We will always look for new opportunities to improve, advocating for inclusivity and equality and providing support and opportunities for all.”

Cedar Rapids has had a progressive record on LGBTQ rights for some time, passing protections based on sexual orientation in workplaces, housing, education, credit and public accommodation in a controversial vote in 1999 where Davenport and Des Moines had previously failed. Ames and Iowa City, however, passed measures with little consternation.

This year marks the first year Dubuque achieved a perfect score from the organization.

Cities are ranked based on five criteria — non-discrimination, the municipality as an employer, services and programs, law enforcement and leadership on the LGBTQ community.

Members of the Human Rights Campaign Foundation, including Senior Vice President for Policy and Political Affairs JoDee Winterhof, were in Iowa City to mark the release of the report and congratulate city leaders.

Winterhof said leaders in Iowa City “have build a flourishing and inclusive community that is welcome to all and focused on building a better future for LGBTQ people.”

Winterhof said 88 cities across the country achieved a perfect score, the most in the eight years of the index and an eightfold increase over the 11 cities that achieved that score in 2012. The national city average also increased to 60 points, the third year in a row the national average has increased, Winterhof said.