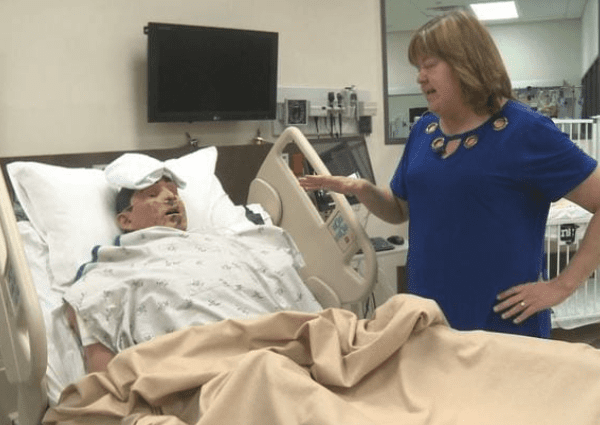 The article below was originally published by KWWL on March 19, 2019.

A study put together by the Registered Nursing organization has Kirkwood Community College leading the way when it comes to nursing education in Iowa.

According to the rankings, Kirkwood beat out 32 programs, including four-year universities, to be named the state’s best.

At Kirkwood, there are more than 800 students taking pre-requisites for nursing careers and another 300 in the technical program, according to the department’s coordinator, Lauri Hughes.

According to RegisteredNursing.org, the rankings focus on test scores and studies each program.

“It just justifies or reconfirms that what you’re doing is making a difference, Hughes said, of the rankings.

Hughes said where she believes the program excels starts with the teachers, all of which have a master’s degree in nursing.

“That’s huge,” she said. “In addition to that, I would have to say we have amazing facilities here.”

On top of the typical in-classroom work, Hughes said there’s a lot of emphasis on incorporating lab work as well as working in a multi-room simulation lab.

“We want them to be able to demonstrate those skills in the lab and then we want to the apply that in our simulation center working with our computerized simulators,” Hughes said.

The community college also partners with seven area hospitals. Hughes said in order to keep the work experience diverse, they have students rotate to different ones every semester.

Beating out four-year programs, Hughes said being a community college makes their program unique and efficient. It’s a cheaper and fast option for students, she said.

Altogether, it can take two and a half to three years to complete the entire program, Hughes said.

There, they also prepare a diverse group of students.

“A lot of our students tend to be more on the non-traditional side. So, right now our average age of our nursing students is 27 and 60% of them have kids,” she said.

Hughes added that 15% of the students are male. That’s up from 9% in 2012. The combination of that group of students brings a collective unique experience into the classroom.

“I think that’s our best-kept secret about our program,” Hughes said.

Despite a nursing shortage, Hughes said the program is seeing more interest and is growing.

Kirkwood narrowly took the top spot but many eastern Iowa programs broke the top-10 including the University of Dubuque, at second.