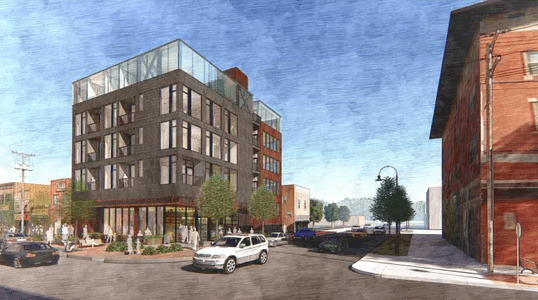 This article was originally published in the Iowa City Press Citizen on January 18, 2019.

The skyline of Iowa City’s Northside District is going to change in 2019.

The five-story, mixed-use project development project at the site of the former Central State Bank at the corner of North Linn Street and East Market Street is set to to rise out of the pit of construction later this month, Ross Nusser, the project developer and Urban Acres realtor and broker, said this week.

The project being built between Northside favorites Oasis Falafel and George’s Buffet is set to be completed and opened by November, Nusser said.

With first-floor space set to host a restaurant and the next four floors to house a series of condos, Nusser said “we’re super excited about the project and what it is going to do for the neighborhood.”

Construction will be coming out of the ground by the end of January, Nusser said, adding “we’ll really start seeing progress in February and March.”

“There was so much to be done underground. We know there’s so much work being done, but it’s hard for people to grasp and see that until the structure starts coming out of the ground,” Nusser said.

Nusser said that they were in discussions with a restaurant to take the main space on the first floor. A half-staircase would lead to a mezzanine level for a smaller, complementary commercial space.

The project’s design has been finalized and was signed off by the city design review staff, Nusser added.

As previously reported by the Press-Citizen, plans show a two-level, townhouse style condo will stretch between the second and third stories, surrounded by four one-bedroom condos on each of those floors. Plans show three larger condos will fill the fourth floor and on the fifth, two large penthouse condos.

The rooftop terrace will include two lounge areas, a planned breakfast bar and catering prep area, and a bocce ball court, all surrounded by greenery planters.

The project also includes seven parking spaces and six moped spaces underground. Nusser also said he expects the front doors will be placed diagonally with large windows along the north and east walls as a slight nod to the corner’s history as Pearson’s Drug Store.

In June of 2017, the Iowa City Council voted 4-3 in favor of the rezoning from CB2 to CB5, which allows for more density, removes parking space requirements for commercial spaces and reduces residential parking space requirements. Council members John Thomas, Rockne Cole and Pauline Taylor voted against the rezoning, citing concerns with the proposed height of the building and lack of age-restricted housing.

The development is the latest change to Iowa City’s Northside, a district known for its longstanding businesses and older buildings. The Brewery Square Building, catty-corner from the new development, was built in 1858, according online Iowa City assessor information. The building that houses Hamburg Inn No. 2 was built in 1890.

Though longstanding businesses like Hamburg Inn, John’s Grocery and George’s remain cornerstones of the district, new projects have slowly popped up. A three-story mixed used structure was built just northwest of Hamburg in 2013. A smaller three-story mixed use building was completed just south of that structure in 2018. The four-story, mixed-use building that currently houses High Ground, RSVP and apartments was built in 2006.