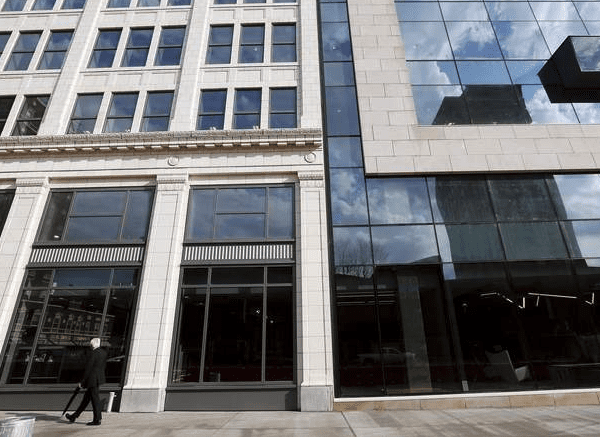 The following article was originally posted in the Cedar Rapids Gazette on Monday, April 22, 2019.

United Fire Group employees are expected to begin moving next week into the newly remodeled and expanded American Building, signaling that more than 2.5 years of construction along downtown’s main drag is nearing the end, company executives said Monday as they unveiled their new corporate headquarters.

The plan is to fill the building at First Avenue and Second Street SE to 75 percent of staff capacity — about 260 of the 348 employee seating capacity — by the end of May. The remaining office space would be reserved for expansion over the next two to three years, if not sooner, said Randy Ramlo, UFG president and chief executive.

Staff from the human resources, investments, project management, analytics, information technology services, accounting and other departments will be moved into the building from “closets and rented spaces” throughout the downtown, he said.

“When people work close to each other, and they have the natural light, and natural work environment, they can work more efficiently and get more done,” Ramlo said.

The home, vehicle and business insurance company is headquartered in Cedar Rapids and has about 1,000 employees overall, including in five regional centers around the country.

The $28 million headquarters project, which began in fall 2016, combined renovation of the 10-story American Building, which was gutted to the studs, with an adjacent, newly constructed 10-story building.

Staff, architects and construction personnel were on hand Monday as people took self-guided tours of the first, ninth and 10th floors. Additional work is needed on several of the other floors.

Here are some details about the new complex:

• 6 inches separate the old and new buildings to allow each building to stand independently. Each building has room to shift in the case of an extreme weather event.

• The two buildings, while technically separate, flow together seamlessly on the inside.

“We wanted to respect the history of the American Building, while making it functional and usable for UFG,” said Al Buck, the project architect for Solum Lang Architects of Cedar Rapids.

• The building sits on 39 concrete, 3-foot diameter caissons, which were drilled 40 to 60 feet deep into limestone bedrock and provide stability.

• Company officials are confident the city’s flood protection plan eventually will cover the American Building, which sits in the flood plain. UFG bought the building in 2014.

“We started in an old house and we moved downtown,” Ramlo said of the company’s history. “Hopefully this won’t be a bad decision, but we believe that levee protection is on its way, so we are committed to downtown”

• The building originally housed the American Trust and Savings Bank, which failed in 1933 during the Great Depression, said Cedar Rapids historian Mark Stoffer Hunter. A bank called Morris Plan later operated there as did numerous unrelated offices in the upper floors, he said. This is the first time the building has had a single user, he said.

• A time capsule was included in the first floor lobby, intended to be opened when UFG reaches its 100-year anniversary in 2046. The capsule includes photography; old communications to employees and shareholders from company leaders; original articles of incorporation of companies UFG acquired over the years, marketing materials; and old annual reports, said Casey Prince, an UFG marketing communication manager.

• The exterior of the building will be lit, Prince said. The historic half will be “uplit” to highlight the architectural elements, while the modern side will have lights “tucked into coves” to provide accents, he said. Lighting capabilities should be similar to the Alliant Building, which can be illuminated in different colors for different occasions, but that’s still being examined, he said.

• The project was awarded $2.6 million in city incentives, in the form of tax increment financing, as well as more than $1.9 million in tax credits and refunds from the Iowa Economic Development Authority.

• Lane closures on First Avenue SE are expected to remain in place for the time being, and it was not clear when traffic patterns would return to normal, Prince said.