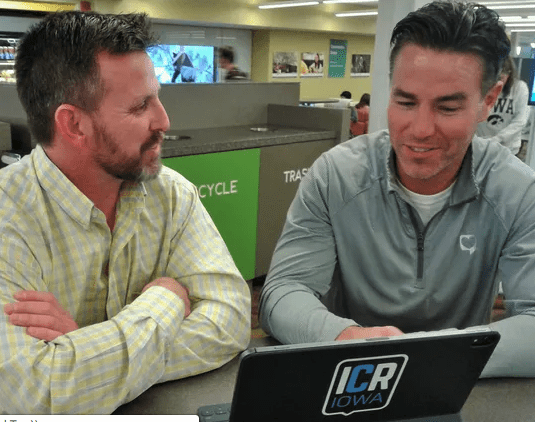 The following article was originally published by the Iowa City Press-Citizen on 10/18/2019.

When Dave Brown prepared to move to Iowa City four months ago after previously living in Arkansas, Oklahoma and Texas, he had a few questions.

“Most of what I knew about Iowa City came from Google maps,” he admitted to me this week.

Better answers came from a welcoming, volunteering stranger, Ryan Bell, who is part of the Wingman Program, sponsored by the ICR Iowa regional development organization.

Through it, newcomers to the area can link up with a local resident willing to give them the lay of the land in the Iowa City/Cedar Rapids area. That provides sort of an insider’s look at housing, education, clubs, city and commercial services or whatever else they might be concerned about. Plus they can gain some valuable personal contacts.

“I was still in Texas when Ryan reached out and asked me what I needed to know,” said Brown. Since he was hired by the University of Iowa in the Facilities Management department, living near work was important.

“He told me you can’t go wrong living in Iowa City or the nearby communities,” Brown said. “He filled me in on traffic, schools, everything.”

“For parents, schools are big,” said Bell, who lives in Iowa City with his wife Colleen and three young children. “They want to figure out where they are going to live and if the kids are going to be happy with their school.”

Brown and his wife, Eva, rented an apartment on the edge of Iowa City where their sophomore daughter enjoys playing volleyball at City High. Their son is a freshman at Oklahoma State University, his dad’s alma mater. The couple is happy with the community and reception they received and plan to build a home here soon.

“We exchanged emails until David got into town,” he said. “Then we met for a drink at Blackstone and we became friends.”

Bell convinced Brown to join the Rotary Club and has introduced him to some of his business contacts. They still communicate often and an outing with the wives is in the works.

Bell is the owner of a Localsloveus.com franchise who moved here from the Quad Cities about three years ago and says he wished he would have had his own “wingman” then.

“The idea is to get somebody to look at this area as a long-term place to live and work and not just a stop along the way,” he said. “I think it helps do that.”

Tim Carty, who runs the Wingman Program for ICR Iowa, agrees. He says the project was started informally by a group of community leaders but was “re-launched” under his organization in April. Since then, it has made 56 matches like the one between Brown and Bell.

Interested persons can apply at www.icrwingman.org and fill out a “preflight checklist” to qualify and be trained as a volunteer contact for the program. The site also contains wingman photos and the topics they are familiar with which might be of help to newcomers.

Persons interviewing or moving to the area are often referred to the Wingman Program by HR departments or can also request a wingman directly from this website as well.

Carty says his organization has nearly 60 volunteers at present. Some help out by giving tours to families interested in settling here. It’s one way ICR Iowa partners with various corporations, hospitals and colleges to help attract and keep quality employees.

“The Wingman Program allows newcomers to decide what it’s like to live here, outside of the bright lights of a job interview,” said Carty. “They can ask more personal or informal questions than they could in an interview.”

As a newcomer participant in the Wingman Program, Brown highly recommends it.

“Of course,” he adds, “I was lucky to get the best wingman ever.”

And how does he feel about relocating to the North?

“I have noticed some differences in culture,” he said with a grin, “but I felt at home here immediately. I have to say I think there is a lot of truth to that ‘Iowa nice” thing.”